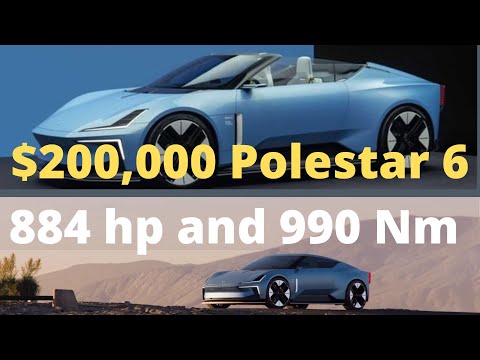 $200,000 Polestar 6 reveals equipped with two electric motors with a capacity of 884 hp and 990 Nm of torque.
Polestar is now owned by Chinese "giant" Geely, which initially operated as a racing team, before becoming Volvo’s high-performance division. Polestar was spun off as an independent electric vehicle business in 2017.
Polestar is strengthening its electric vehicle lineup with the introduction of EV roadsters, including the Polestar O2 concept. The production version of this model will be called Polestar 6.
As part of the sports car group, the Polestar 6 is positioned as a direct competitor to the Porsche Taycan and Porsche 911.
This is not the first time there has been a comparison between Polestar and Porsche. Thomas Ingenlath, CEO of Polestar, once made headlines when he announced that the company was competing with Porsche for the title of "best electric sports car". Specifically, the Polestar 4 is said to compete directly with the Porsche Macan EV.
Meanwhile, the Polestar 6 model will use the 800V electric platform, which is also the foundation applied to the Polestar 5 electric sedan.
The vehicle’s exterior is designed to maximize range, by increasing aerodynamics, and includes a strip of taillights that act as a rear spoiler to reduce rear turbulence.
The commercial version of Polestar 6 will have 2 doors and 4 seats, and the body is made of aluminum to increase rigidity and optimize mass. Aside from the hardtop, it’s still unclear how much of the design from the concept will be applied to the production version.
However, this model will have features such as a 15-inch central touch screen, a gear lever placed on the steering wheel, integrated speakers on the headrest, a rearview mirror with an integrated camera, and status lights charging.
With 2 electric motors, this sports car has a capacity of up to 884 horsepower and 990 Nm of torque. Thanks to that, the car is capable of accelerating from 0-100 km / h in 3.2 seconds, before reaching a limited speed of 250 km / h. It also shows that Polestar 6 will use the same battery as the 2023 Polestar 3 SUV, which is a 111 kWh battery pack, for a range of up to 600 km.
The first 500 units will be numbered, belonging to the LA Edition version with unique blue exterior paint, and 21-inch alloy wheels. The interior is upholstered in light leather. The Polestar 6 will begin production in 2026. Polestar 6 LA Edition is expected to sell for $200,000, and the reservation requires a $25,000 down payment.
—–
Thanks for watching!
Don’t forget to hit the subscribe button to stay updated with the latest videos
——
* Copyright Disclaimer Under Section 107 of the Copyright Act 1976, allowance is made for "fair use" for purposes such as criticism, commenting, news reporting, teaching, scholarship, and research. Fair use is a use permitted by copyright statute that might otherwise be infringing. Non-profit, educational or personal use tips the balance in favor of fair use.
For copyright matters please contact us at: pingpong.vtv4@gmail.com