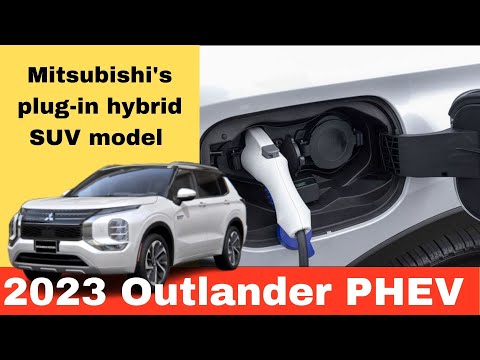 2023 Mitsubishi Outlander PHEV in US Price?| New Auto&Vehicles EV
Mitsubishi has officially announced the price for the 2023 Mitsubishi Outlander Plug-in Hybrid in the US market.
The selling price of this SUV in the United States will be $ 39,845. Notably, because the 2023 Mitsubishi Outlander PHEV is imported CBU from Japan, this model will not be eligible for the federal tax assistance of $7,500.
Previously, the new generation Mitsubishi Outlander PHEV was officially launched to US users at the 2022 Twin Cities Auto Show taking place from May 14 to May 22.
The 2023 Mitsubishi Outlander PHEV has a relatively similar appearance to the regular version.
The front-end design has been improved with the extremely powerful Dynamic Shield design language. The X-shaped grille system is expanded with glossy black painted horizontal bars and chrome plated.
The LED headlights are designed to be narrowly stacked and lowered, creating a sharp edge for this SUV. The positioning LED strip of the 2023 PHEV version is narrowed to create a subtle beauty for the car when viewed from the front, the separate fog lights are located in the large air intake. The front bumper of the large 2023 Mitsubishi Outlander PHEV is located at the bottom, which is luxuriously silver-plated.
When viewed from the side of the car, this model will look angular and sharp thanks to the front headlights. The veins throughout the door, door handles, and even wheel arches are extremely sporty.
The roof is also straightened back to bring sportiness and provide more comfortable space for the third row. The glossy black painted glass rim makes the Mitsubishi Outlander PHEV 2023 extremely angular, but the window for the third row is somewhat narrower due to the design accents on the body.
The rearview mirror is painted in the same color as the body to provide uniformity, with an additional intelligent turn signal function. Below is a set of 20-inch 5-spoke alloy wheels that make the new Mitsubishi Outlander stand out and attract all eyes.
Moving towards the rear of the car, the overall Mitsubishi Outlander PHEV looks quite sturdy and superficial. The LED taillights are quite thin, and extremely sharp extending both the tail and the body, creating a highlight for the PHEV 2023 with a Y-shaped LED strip extending toward the center.
The exhaust part of the car is designed to be concealed to bring a different look. The rear bumper is covered with large chrome, and the upper spoiler and brake lights are designed with sophistication and sport.
Stepping into the 2023 Outlander PHEV cockpit, customers can’t help but be overwhelmed by the grandeur and class. The details are all covered with high-quality leather, with a masculine shape that attracts men.
The 2023 Mitsubishi Outlander PHEV version is equipped with a 4-spoke steering wheel, leather upholstery, and many integrated keys on both sides. Behind the steering wheel is a 12.3-inch digital screen with all the vehicle’s operating parameters.
The 9-inch floating central touch screen and the air-conditioning vents running horizontally below bring a youthful and modern style to the interior space of the SUV.
The dashboard has only a few mechanical buttons with a neat and scientific design. The compact gear lever combined with the convenient rotary knob makes this model exude luxury and high class.
Mitsubishi equips the 2023 Outlander PHEV with a 2.4L four-cylinder engine combined with 2 electric motors located at the front and rear, with a 20kWh lithium-ion battery pack.
Mitsubishi’s plug-in hybrid SUV model possesses a combined capacity of 248 horsepower and maximum torque of 450 Nm.
The 2023 Mitsubishi Outlander PHEV is also a pioneer model using an improved version of the Super-All Wheel Control (S-AWC) system. This is Mitsubishi’s technology to control all four wheels, integrating the electronic balance system (ASC), anti-lock braking system (ABS), and Active Yaw Control technology typical of the Japanese automaker.
When in pure electric mode, the 2023 Mitsubishi Outlander PHEV can complete up to 61 km. Meanwhile, if combined with a 56-liter fuel tank, the car will have a maximum range of up to 676 km.
The parameters of the Hybrid system will also be displayed on these screens to help the driver easily monitor during use.
As planned, the Mitsubishi Outlander PHEV 2023 will soon be luanched in Canada and other markets, including Australia.
——
* Copyright Disclaimer Under Section 107 of the Copyright Act 1976, allowance is made for "fair use" for purposes such as criticism, commenting, news reporting, teaching, scholarship, and research. Fair use is a use permitted by copyright statute that might otherwise be infringing. Non-profit, educational or personal use tips the balance in favor of fair use.
For copyright matters please contact us at: pingpong.vtv4@gmail.com