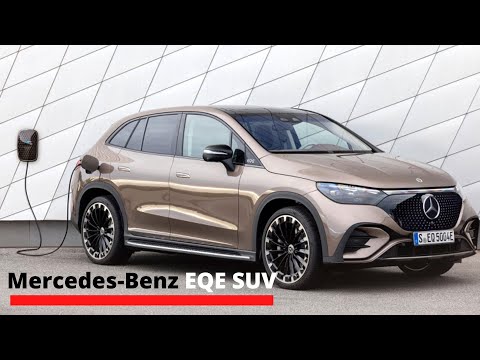 All-new Mercedes-Benz EQE SUV – Rolling 590km/charge | New Auto&Vehicles EV
Mercedes-Benz has launched the all-new electric-powered 2023 EQE SUV with a range of up to 590 km on a single charge.

According to a representative of Mercedes-Benz, the EQE SUV acts as a raised and more practical version of the EQE Sedan model, and the new Mercedes-Benz EQE SUV is the fourth model born from the specialized EV platform. for electric cars.

The German automaker also emphasized that the electric Mercedes-Benz EQE SUV is not an "electrified" version of the GLE model. This new model is completely different from the cases of EQB and EQC (the "electrochemical" versions of the GLB and GLC respectively) because it is a product that has been researched and developed from the ground up, not simply a model. electric motor attached to the existing chassis of an internal combustion engine vehicle.

Mercedes says that the shorter wheelbase makes the car appear more agile and that’s quite a feat for a car weighing around 2,600 kg. The luggage compartment capacity of the EQE SUV reaches 520 liters, although it is larger than the 430 liters of the EQE Sedan, but only on par with the EQC model in the lower segment and even worse than the GLE model (630 liters).

EQE SUV has 3 configuration versions including EQE 350+, EQE 350 4Matic, and EQE 500 4Matic, along with 2 AMG high-performance versions, EQE 43 and EQE 53. All are equipped with the same 90.6 kWh battery. as in the low chassis EQE Sedan. Although positioned as the lowest-end version, the EQE 350+ has the longest travel range, up to 480 – 590 km according to WLTP’s testing process.

This version has a capacity of 288 horsepower (215 kW) and maximum torque of 565 Nm. EQE 350 4Matic also owns the same power level, but due to an additional electric motor in the front axle, the maximum torque increases to 765 Nm, and the travel range is reduced to 459 – 558 km. Finally, the EQE 500 4Matic is the most powerful of the ones outside of the AMG group.

Also with all-wheel drive, this version achieves 396 horsepower (300 kW) and torque at more than 858 Nm. The range of 460 – 547 km can also be considered quite good with this level of good performance. 4Matic versions have the function of disconnecting the electric motor at the front axle, only operating the rear axle to save energy.

All EQE SUVs support the fastest charging rates up to 170 kW. Mercedes says the car only needs to be charged for 15 minutes with DC electricity to store enough energy to travel 220 km. In addition, the battery pack is warranted for 10 years or for a range of 250,000 km, whichever comes first. In terms of technology, of course, EQE SUV owns all the best that the German automaker can bring at the moment.

Mercedes’ Digital Light technology is provided, which recognizes traffic signs from a distance and then illuminates it down the road ahead. There is also the option of a rear-wheel steering function, combined with a 4-point suspension at the front and a multi-point in the rear to help the EQE SUV manage flexibly in crowded road conditions.

The price of the Mercedes-Benz EQE SUV will be announced immediately after being released from the Tuscaloosa, Alabama (USA) factory in December 2022. Vehicle batteries are also available nearby, at a factory in Bibb County, which should ensure that the EQE SUV is eligible for tax credit support under the Inflation Reduction Act.
—–
Thanks for watching!
Don’t forget to hit the subscribe button to stay updated with the latest videos
——
* Copyright Disclaimer Under Section 107 of the Copyright Act 1976, allowance is made for "fair use" for purposes such as criticism, commenting, news reporting, teaching, scholarship, and research. Fair use is a use permitted by copyright statute that might otherwise be infringing. Non-profit, educational or personal use tips the balance in favor of fair use.
For copyright matters please contact us at: pingpong.vtv4@gmail.com