FIRST LOOK inside the most luxurious electric car EVER! Electric goes Rolls-Royce / Electrifying 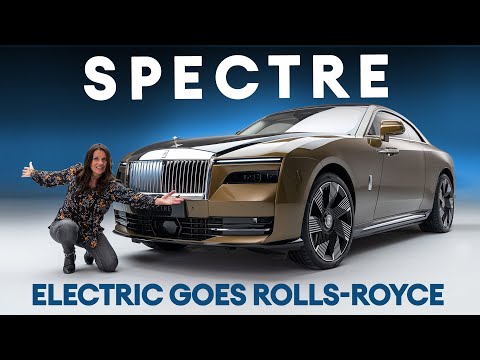 When Charles Rolls drove a 1900 electric car named the Columbia, he made a prophecy: “The electric car is perfectly noiseless and clean. There is no smell or vibration. They should become very useful when fixed charging stations can be arranged.”

It’s only taken a century for his bright idea to end up being reality! And bright it is! This colour is exclusive to the Spectre – it’s called Chartreuse. And it apparently divides opinion at HQ. We love it but what do you think? Let us know in the comments below…

Rolls has already dabbled in electric powertrains in both its 102EX and 103EX concepts. The Goodwood-based firm says that these cars prompted questions from clients as to when a production version would be arriving, as electric power is seen as the ‘perfect fit’ for a Rolls-Royce.

So here it is – the Rolls-Royce Spectre. Which, despite its name, has no formal connection to James Bond. Although we still don’t know many of the technical details (it’s VERY likely to borrow most of its battery and drivetrain from the new i7), we’ve been able to have a look around the final production version to discover what lucky buyers have in store.

It’s apparently priced between the Cullinan SUV at £264,000 and the Phantom at £360,000, so somewhere in the region of 300 grand. Which – given the crazy waiting times – means you’ll be able to get a Spectre before you can get a VW ID4! Although you will also have to sleep in it, if you’re a normal person with an overdraft.