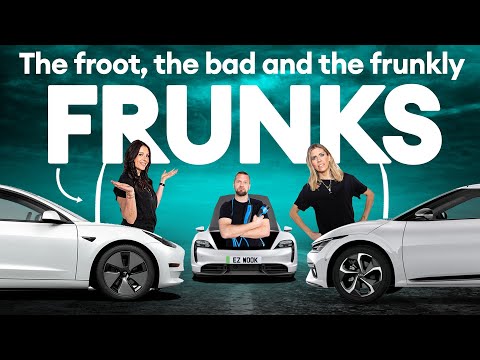 Most conventional cars have an engine at the front and space for luggage at the back, but it doesn’t have to be that way with electric cars. As electric motors are compact and simple, they can be hidden under the floor often close to the rear wheels. This means there’s space in the front for other things, including a big hole for storing extra stuff.

Some people (who should know better) refer to these spaces as ‘froots,’ a contraction of ‘front boot.’ Americans call boots ‘trunks’ so the Stateside version is ‘frunk.’ Sadly, that’s a widely used term as well, even though it sounds like a variety of cold sore.

In the world of electric cars, some frunks are frootier than others. Some cars have about enough room for nothing more than a toothbrush, while others will swallow several bags of shopping. Join Ginny, Nicki and Tom as they guide you through the wonderful and weird world of frunks…