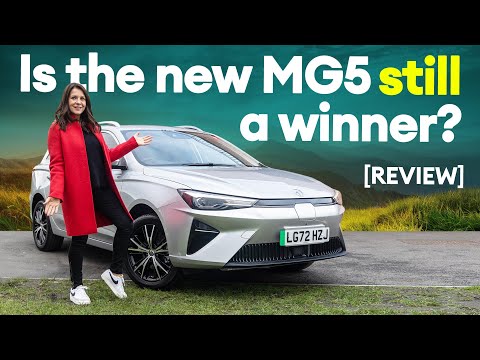 The MG5 EV has been a bit of a surprise hit in the UK. It’s combination of a long range, low cost, practicality and refined driving manners have made it one of Britain’s best selling electric cars, and is the second best selling estate too.

But that’s not to say it was fault-free. Its somewhat utilitarian design was hard to love, unless you have a penchant for early 1990s car styling. Now MG has launched a revised version which aims to answer all of the current car’s failings while keeping everything owners love.

While there’s good news on the design and equipment front, there’s a downside… it’s more expensive than it used to be. Rising costs, specification improvements and the loss of the grant pushing the starting price up £30,995 – a 17% increase on this time last year.

The entry level model is now called the SE, mirroring the naming used on the latest version of the ZS EV. This version has a bigger 10.25” touchscreen and an app, called iSMART to control the car’s charging and heating remotely. The posher Trophy costs £33,495 and adds 17 inch alloys, a 360o parking camera, heated front seats, privacy glass at the rear, rain sensing wipers and climate control.

So has the price increase taken away the MG5’s biggest selling point? Join Ginny as she takes one of the first facelifted cars to arrive in the UK through its paces. Do the sums still add up? As always, let us know what you think in the comments below.