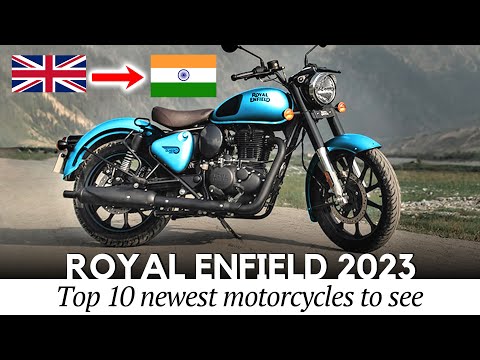 Royal Enfield is the oldest global motorcycle brand in continuous production since 1893. Despite its rich English heritage, today it is an Indian multinational manufacturing company with a solid lineup of bikes sold in all major markets. In this video we will briefly review all of the contemporary models from the brand, that might be available at dealerships in your area. These motorcycles have attractive classic designs, incredibly affordable prices and in the near future are expected to reach a hallmark milestone of selling 1 million units per year.

Middle-weight bikes you have to check out: https://www.youtube.com/watch?v=B5kAtiPSA6c

Rundown of all models from this #ATmotorcycles video:

Based on the adventure-focused Himalayan, the Royal Enfield Scram 411 is a scrambler-styled dual-sport motorcycle that targets the younger generation of riders.

Royal Enfield Classic 350 enters its 2nd generation, retaining the familiar silhouette that dates back to the post-war years, and blending it with new tech and powertrain.

The Royal Enfield Continental GT 650 Twin is the sportiest bike offering that sticks to the classic café racer single seat design of 1960 and 70, and recaptures the spirit of the iconic Continental GT 250. It has a sculpted 12.5L tank, durable frame developed alongside the legendary Harris Performance.

Royal Enfield Meteor 350 is an entry-level cruiser from the company that was the first bike to receive the brand’s all-new air-oil cooled 349cc single cylinder.

As of today, Royal Enfield doesn’t yet have a bike platform that would be able to compete on equal terms at international motorcycle championships. Therefore, for now the Indian manufacturer has established its own single make cup which comprises of a grid of 25 race prepared Continental GT-R650.

Royal Enfield Classic “Divine” was built by Neev Motorcycles, who wanted to style the bike as bobber while keeping its exterior loud but classy.

Royal Enfield Bullet has its roots going back to 1932, when it was produced by the original UK company. Today, the model is offered exclusively as a 350cc model, in two guises – base and ES.

In essence the Interceptor 650 is a less radical version of the Continental GT 650 with a standard design and a black premium touring dual seat. The contemporary model draws inspiration from the 1960 Interceptor, so basically embodies a British roadster with a grain of California’s Desert Racer.