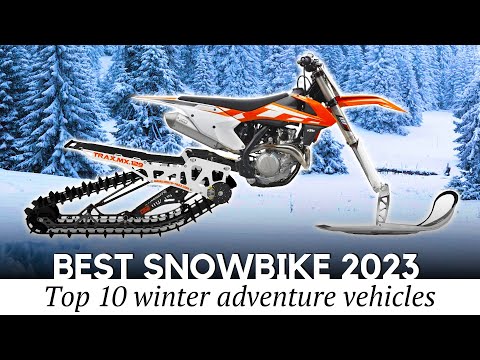 A dirt bike should not be left in storage when nature decides to freeze your favorite trails. Instead, just strap on a snow bike kit and enjoy riding through the winter – the season that has a limitless potential for extreme experiences. In this video, we shall cover the products from the industry’s most prominent players as well as the newest snow bike models that promise to reinvent winter sports once and for all.

List of all vehicles that were shown in this #ATmotorcycles video:

TImbersled lineup includes 4 model families in 2023: the legacy ARO, the dirt-bike RIOT, the youth Ripper, and the race-ready SX.

Moon Bike is an electric snowbike that can offer speeds up to 26 mph and 90 minutes of ride on a full battery.

After selling Timbersled to Polaris and fulfilling a working contract as their technology developer, Allen and Natasha Mangum are returning to the industry that they had originally built from the ground up. The new enterprise Mountain Top Snowbike offers an extreme conversion kit that was created to lead.

The story of the Bigfoot’s snow bike began in Alberta, Canada in 2013 as C3 Powersports. Today the brand is known as Yeti Snow M-X and its currently under an umbrella of Camso conglomerate. This means high customer service standards, lifetime-guaranteed carbon-fiber chassis and a versatile lineup.

Fat tire electric motorbikes have been gaining popularity across Canadian wilderness, but with the Combat E-Bike Daymak went even further and decided to create a model that allows potential owners to ride in all weather conditions.

Widescape WS250 is the world’s first standup snowmobile, that is also one of the lightest models on the market, weighing 200 pounds.

Since 2016 CMX Snowbikes have made a name for themselves as manufacturers of snowbike kits with the most forward mounted rear suspension, custom belt-drive system and CNC machined parts.

FLEX Snowbike is a modular electric bike, built on a foldable 6061 aluminum frame with a front fork suspension, a snowboard-like single ski, and a rubber tread in the rear.

Winter sports are not the major focus of MotoTrax since their major background comes from dirt motorcycles. Therefore, snow bikes that come out form Spokane, Washington are designed to handle as close to a motorbike as possible.

Skiing and snowboarding will have to make room for a newly emerging snow sport with full mountain and lift access. Unlike the rest of the lineup the Sno-Go snow bike is not motorized and is used to descend the slopes offering any level of rider pure and ultimate shred-ability.