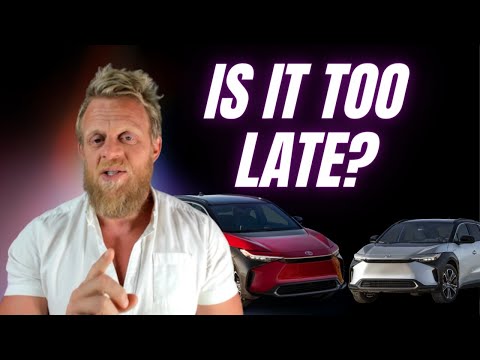 Get a 10% discount on tickets to Fully Charged Live in 2023 (and meet me in person) using my discount code: EVFCLAU10

This code is for Australia only.

Our 10% discount code for London and San Diego will be released closer to the event dates.

Join this channel to get access to perks►
https://tinyurl.com/theevmembership

Members-only videos (see videos before anyone else)►

Join me on Patreon ► https://tinyurl.com/theevonpatreon

Join us on our newly created Telegram Channel to stay updated: https://t.me/theelectricviking

See more videos about Toyota:
Toyota claims it is finally changing Its EV Strategy to take down Tesla

Electric car sales up 75% worldwide, VW up 0%, Toyota only loser

Toyota says the media are confused about EVs

Toyota is 100% determined to continue its anti EV propaganda

Toyota overtakes VW – now most indebted company in the world

The wheels are falling off: Toyota Plug-In sales down 58%

Toyota blasted by investors for its disgraceful EV strategy

Toyota’s Tesla powerpack doesn’t even work when you need it!

This channel may use some copyrighted materials without specific authorization of the owner; but content used here falls under the “Fair Use” Copyright Disclaimer under Section 107 of the Copyright Act 1976.

Allowance is made for "fair use" for purposes such as criticism, comment, news reporting, teaching, scholarship, and research. Fair use is a use permitted by copyright statute that might otherwise be infringing. Non-profit, educational or personal use tips the balance in favor of fair use.

Contact us for any copyright issues. If you want a credit of any footage we are using, please let us know.