Most Anticipated Italian Motorcycles You Cannot Miss: Design and Engineering Changes of 2023 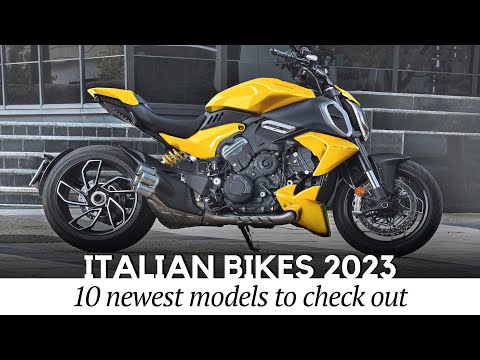 Riding passion, visual aesthetics and uncompromising performance are the key pillars of the Italian motorbike industry. Two wheelers that fly the il Tricolore never fail to fascinate with their focus on the technical supremacy which is evident within the lineup presented for the 2023. Today we shall review the most anticipated Italian motorcycles and scooters of the upcoming model year.

More #AutomotiveTerritory videos for you to consider watching :

All two-wheelers that were mentioned in this #ATmotorcycles video:

Ducati’s street legal sport bikes have always been borderline racing machines, but the all-new Ducati Panigale V4 R is the closest you can get a competition superbike with technical solutions and livery derived straight from MotoGP and WorldSBK Championship.

Moto Guzzi V100 Mandello will be arriving to the market in two versions, base and S, plus the limited edition Aviazione Navale.

To celebrate the 30th anniversary of Aprilia’s first World Championship title, their Noale Racing Engineering Department and Moto GP Technology have collaborated to bring the most extreme Aprilia RSV4 XTrenta.

Since the Panigale V4 lineup was revamped for 2023, its popular supernaked version had to follow suit. The new Streetfighter will be available in three versions: V4, V4 S and the range topping V4 SP2.

The Multistrada has always had a split personality of an adventure and a sport tourer. In 2023, however, Italians are eliminating any ambiguity, by launching a pure adventure rig with Dakar racing spirit. The DesertX was designed by Centro Stile Ducati.

Refreshed for 2023, the Benelli Leoncino family adds an 800 Trail model with a bigger 19-inch front wheel, knobby tires, raised seat and a side plate with flat-track styling.