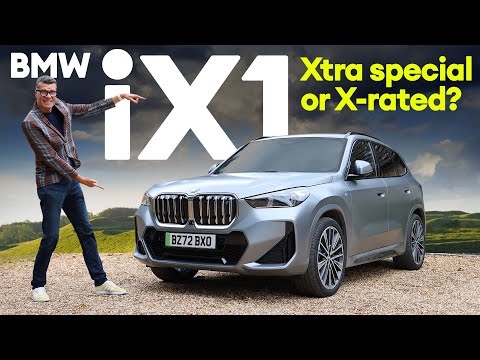 How do you replace the BMW i3 without actually replacing it? The answer, if you’re BMW, is with this car – the iX1. Although this all-new compact SUV technically replaces the much-loved tech-fest that was the i3 as BMW’s most ‘affordable’ electric car, it’s a completely different car, designed and built to appeal to a new audience.

The iX3 might not be ground breaking in the way the i3 was (and still is), but it makes business sense. Buyers, in general, are looking for a practical, long range electric car that looks, well, like a normal car.

As with the existing i4 and iX3, the iX1 shares its body with conventional petrol and diesel models, but BMW expects that 80% of new X1 sales to be the fully electric version. The iX1 will roll down the same production line as its ICE relations so that manufacturing can be flexible to customer demand. That should be good news for supply, and help avoid the long waiting lists which currently affect the i4 especially.

The iX1 pairs 64.7kWh of usable battery with an electric motor at each axle, the headline figures being 308bhp and up to 272 miles of range. The latter is just 13 miles down on the iX3 while the former is actually a bigger number than the larger model in the range. It’ll charge at 11kW AC as standard – going from 0-100 per cent in six hours – while optional 22kW charging cuts this to 3h45m. It’ll accept up to 130kW of DC charge, completing 10-80 per cent in around half an hour.

Join Mike as he takes a drive in a pre-production version on UK roads for the first time. Are you happy that BMW has opted to build a more normal electric car? Are you an i3 owner that might consider switching to an iX1? As always, let us know in the comments.